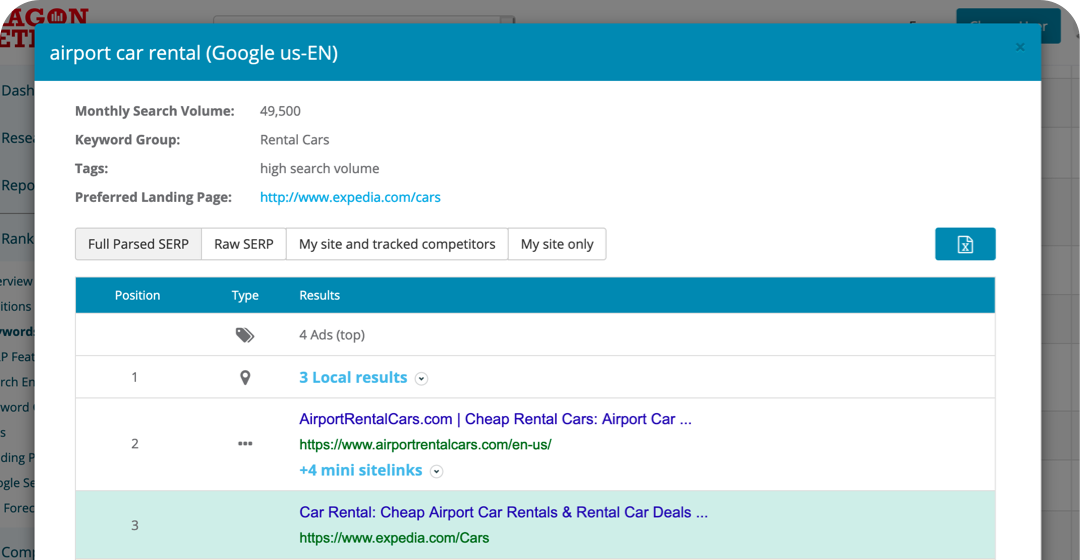 It will come as no surprise to most Dragon Metrics customers that Keyword Ranking is by far the most popular report in the platform. It’s the most detailed of the 14 ranking reports provided by Dragon Metrics, providing a view into the foundational ranking data that powers all of the other reports.

With this in mind, we’ve been rolling out a number of new features over the past couple of months to provide an even deeper analysis of the SERP. We figure it’s finally about time we officially announced everything that’s launched recently. There’s a lot here, so let’s get started.

See top 50 results for any keyword 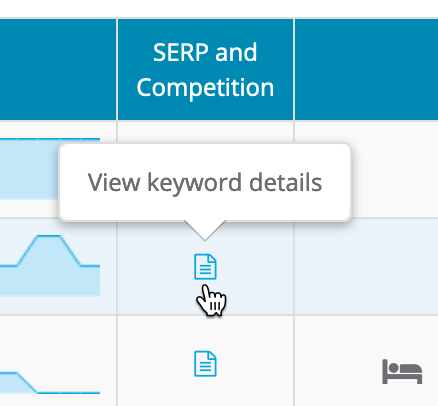 Here, you’ll see basic data about each keyword along with 4 tabs:

On the Full Parsed SERP tab, you’ll see the top 50 results on the SERP as collected by our crawler. 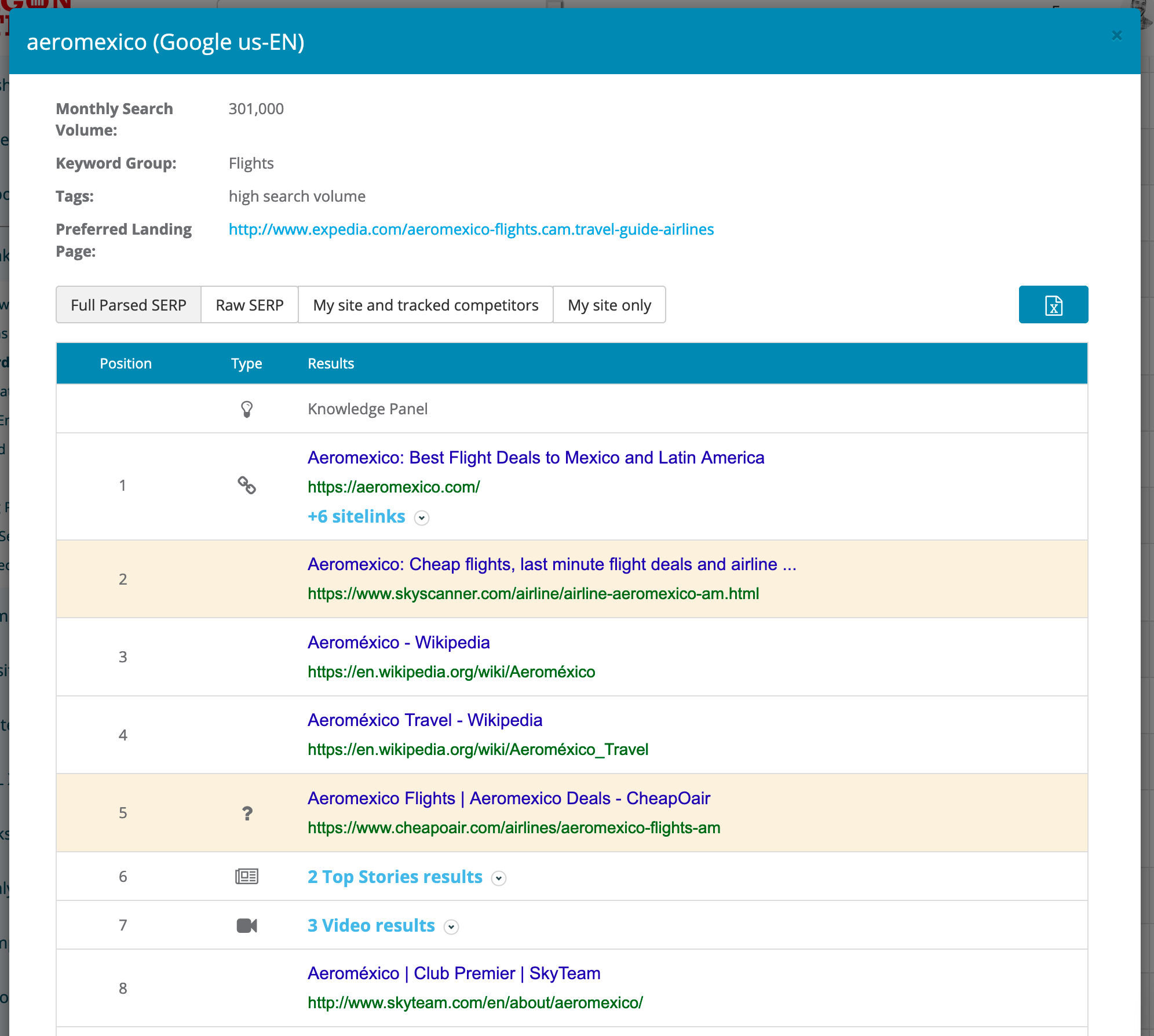 In addition to basic organic results, all 30+ SERP feature types are shown here as well. If a SERP feature includes multiple URLs, click the blue link or the expand arrow to see all of them. 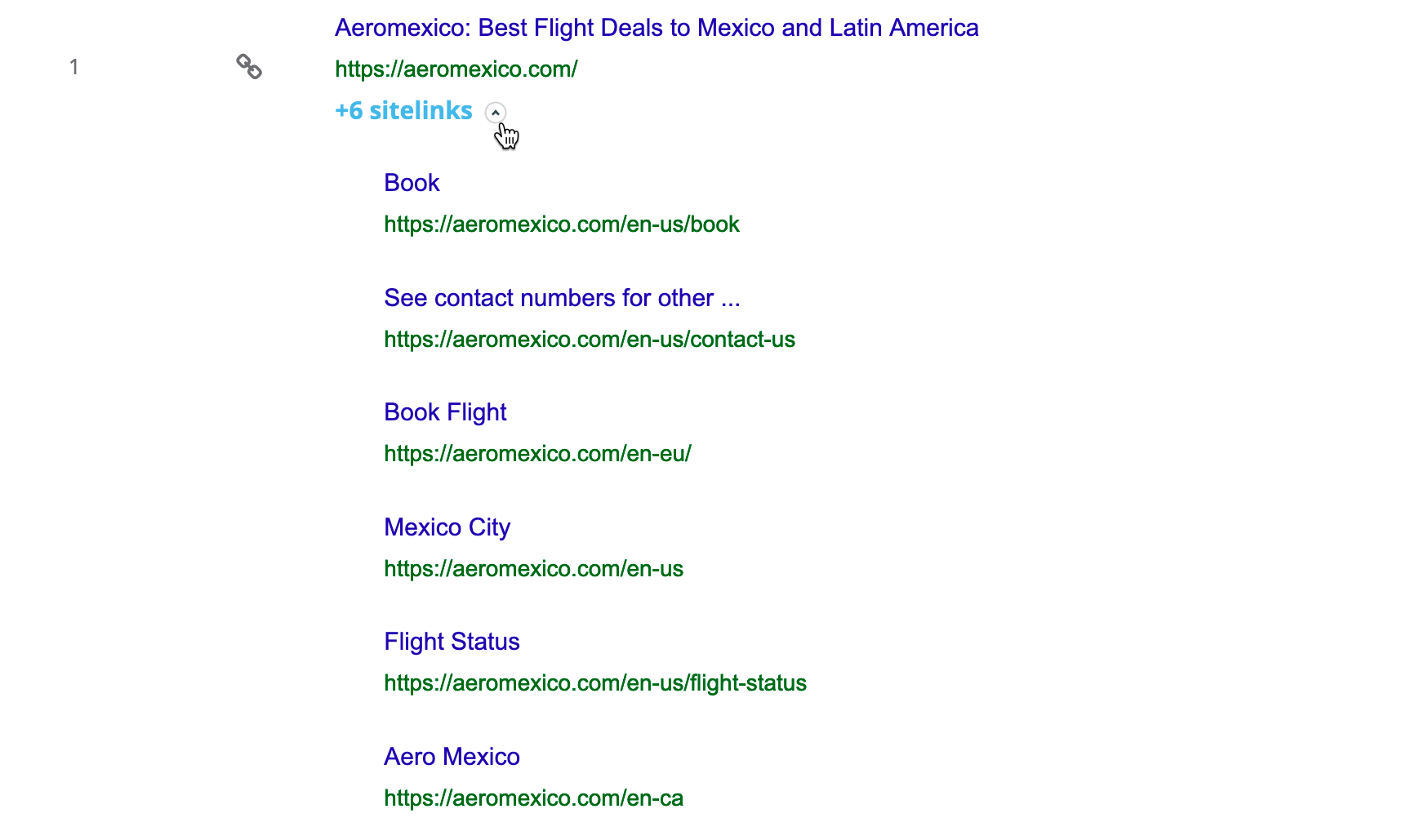 Click the button in the upper right to export all 50 results to Excel.

See the full story in the raw SERP

While the parsed SERP can show you a streamlined and simplified version of the results, there may be times when you want to see the exact SERP that Dragon Metrics collected for this data. This is now possible by clicking the Raw SERP tab. 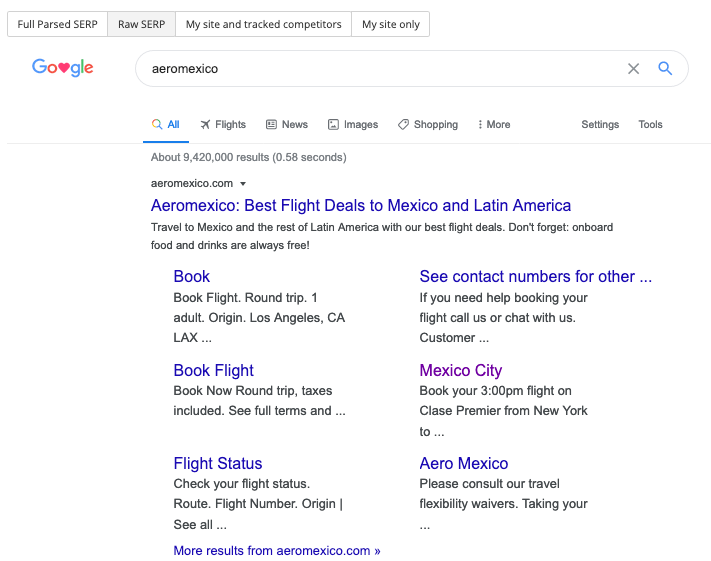 Now no matter what you’re looking for, all details are available here, including descriptions, image thumbnails, and all other SERP content. 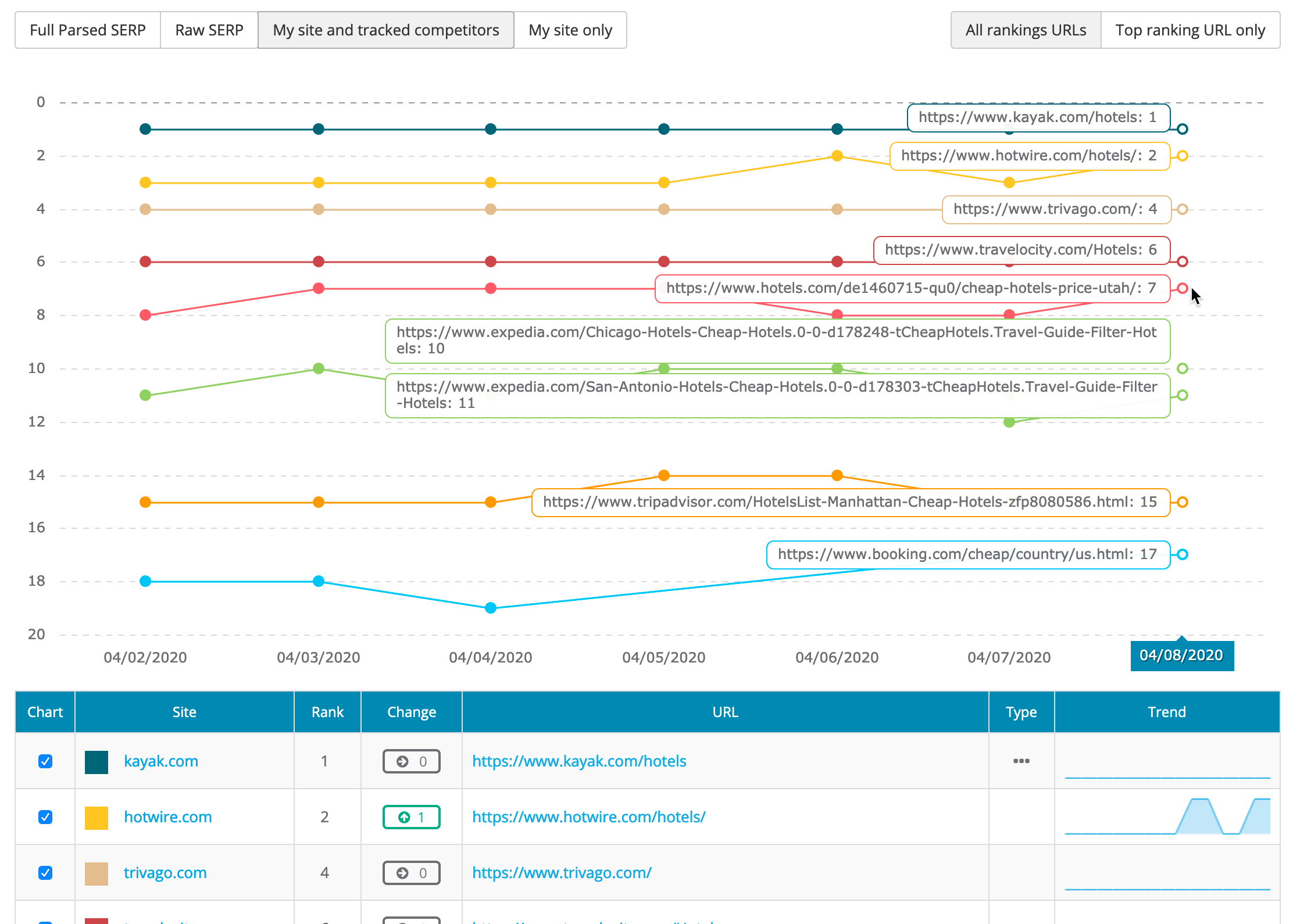 Moving on to the My site and tracked competitors tab, here we’ll show you a detailed comparison of competitor ranking URLs.

By default, all URLs from your site or your tracked competitors that show up on the SERP during any day in the selected date range will be displayed in the chart and table. This can help show fluctuations of both ranking positions and whether or not each domain’s ranking URL stayed consistent throughout the period.

It’s possible and common that a single site can have multiple URLs ranking for a keyword. If these URLs are consistently ranking together on the same SERP, this can be a big win — you’re just owning more of the SERP! But if multiple URLs are fighting for a keyword’s rankings with a different URL replacing each other ranking for the keyword each day, you could have an issue with keyword cannibalization.

Dragon Metrics has made it even easier and more robust to visualize this phenomenon.

By default, we’ll show the top ranking URL for each keyword. But now, if there are multiple URLs from this site ranking for this keyword, we’ll show an expand arrow next to it.

Click the arrow to expand and see all ranking URLs for this keyword.

This is great for seeing what’s happening on the last day in the selected date range. But what about the scenario where the URLs are swapping out on the SERP each day?

To visualize this, we return to the My site only tab in SERP and Competition. This tab shows all URLs that ranked on the SERP for any date in the selected date range. Even if a URL only appeared for one day of the week, it’ll still be shown in the chart and table. 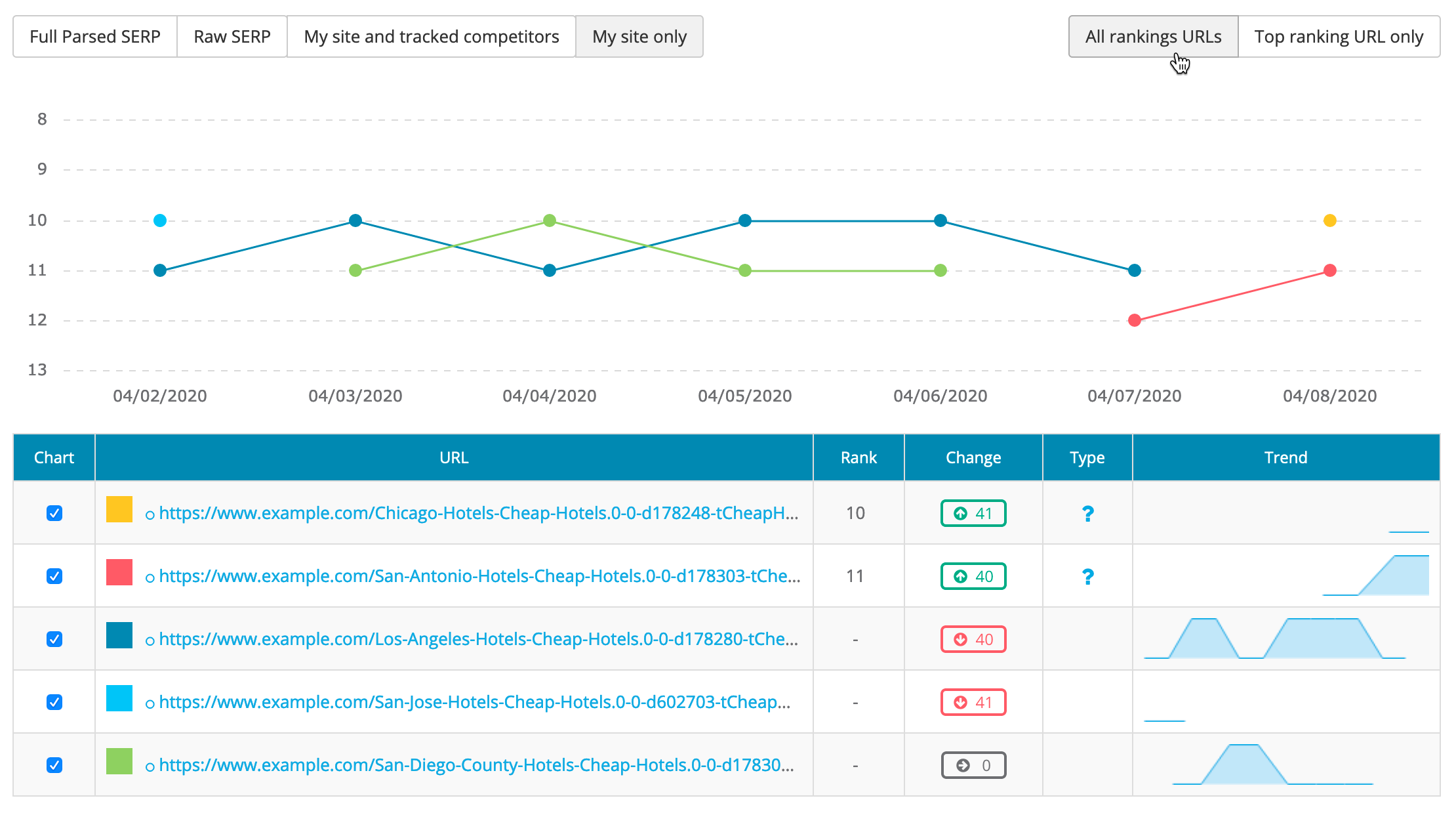 In the example above, you can see this site has two URLs ranking for this keyword on every day in the past week, but they’re a different two URLs almost every day. This chart helps you easily visualize the fluctuations.

To simply this view to show the top ranking position on each day, simply click Top ranking URL only and you’ll be able to see quite clearly the ranking position was actually very consistent throughout the week. Hovering your cursor on the chart will show which URL ranked highest on each date. 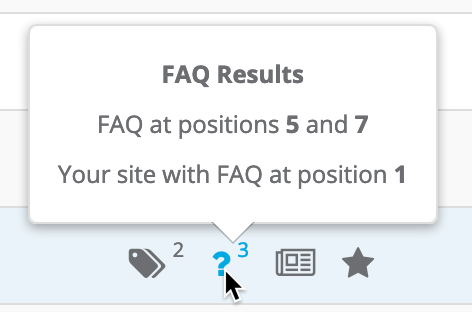 We’ve also updated and simplified the way SERP features are summarized in popovers when hovering on each icon.

We’ve added two new options to better filter your keyword data. The first is Begin date position. In conjunction with End date position or Movement, this filter allows for some powerful new segmenting options. For example, you can use the filter as shown in the screenshot above to show all the keywords that entered position 1 during the selected date range.

We’ve also added a filter for Keyword. For some reason we’ve had filters for virtually every other field, but not this fundamental one. (We can’t believe it either!) We’ve finally corrected this omission in this release.

We’ve completely redesigned how Organic Visibility Score and Competitor Discovery Scores are calculated. The new method now aligns these two scores so they are now both the same. This new Organic Visibility Score has been updated to reflect the reality of the modern SERP and boasts greatly improved accuracy. Read more about the update in our knowledge base (must be signed-in to Dragon Metrics to view).

We’ve also launched a new metric called Traffic Index. While similar to Organic Visibility, this metric takes keyword search volume into consideration, so is similar to an estimate of monthly organic traffic.

Technically speaking, this metric has existed in Research for years, we’re now bringing to it to Campaigns. Traffic Index appears for all keywords at the top of many reports, as well as individual Traffic Index fields for each ranking keyword. Traffic Index is used heavily in our new Ranking Overview report, so you’ll definitely want to check that out too!

Analyze a URL in URL X-Ray

As URL X-Ray grows in its maturity, adding even more features than before, we continue to integrate the tool deeper into the platform.

Now, in Keyword Ranking if you ever want to analyze any URL in the report, simply click it to view all data we have on this page in URL X-Ray. It’s just like saying, “Hey Dragon Metrics, show me everything you know about this URL.” In just a few seconds, you can see all of the ranking keywords (both tracked and untracked), Google Analytics, Google Search Console, content, onsite issues, keyword optimization, internal links, and backlink data for any URL on your site. It’s one of the most unique and invaluable tools in Dragon Metrics. If you haven’t taken advantage of it yet, now is the time!

That’s a wrap on the new features we’ve launched for the Keyword Ranking report in the past couple of months. But we’re not done yet! Even more improvements are planned for the near future. Stay tuned for more information or better yet, book a session with us and we’ll give you a preview of what’s in store!