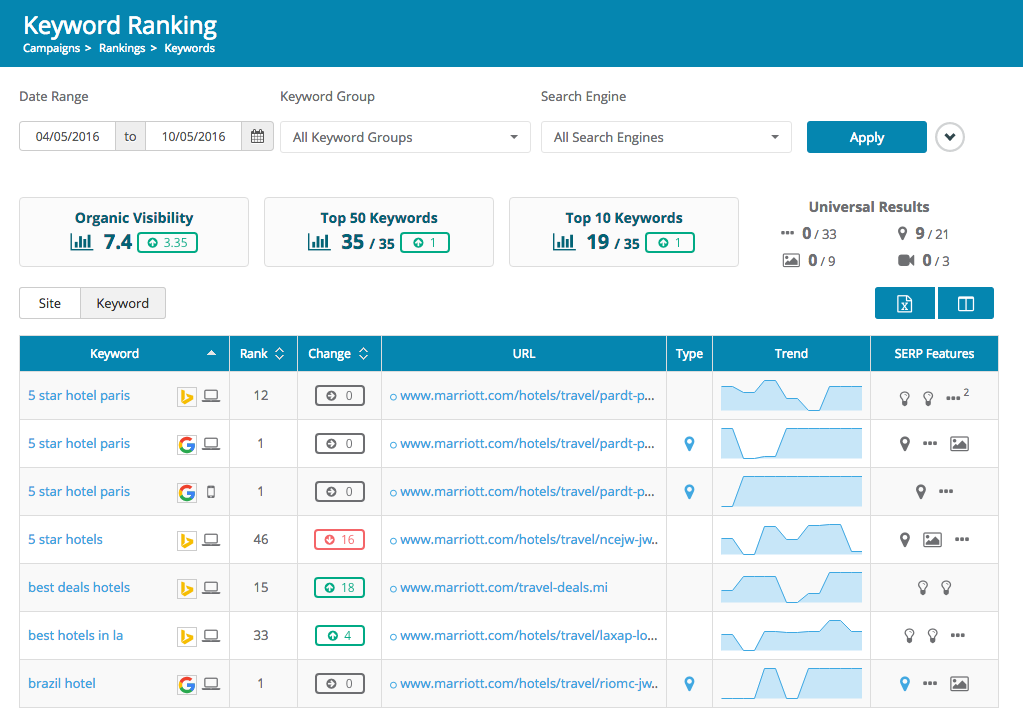 In simpler times, search engine results pages (SERPs) were predictable – 0-3 ads on top and bottom, a few ads on the side, and 10 organic links in the left column. How times have changed.

Now more than ever, SERPs contain a huge variety of result types. From local packs to news results, and in-depth articles to knowledge panels, these specialized result types have dramatically changed SEO strategies, and it’s time your rankings in Dragon Metrics reflect this new environment.

Thankfully, that time is now. On June 3rd, we’ll be releasing an update that tracks over 20 different universal result types. We’ve also completely redesigned the Keyword Ranking page to reflect these changes. Let’s take a look!

The biggest news in this release is that we now collect rankings for universal result types, many of which were not included in reports previously. For search engines such as Google and Bing, we now include results such as:

Next to each URL, you’ll see the Type column. If the ranking URL is an organic result, it will be left empty. If it’s a universal result, an icon will be displayed representing the result type.

For other search engines, such as Baidu, we collect completely different result types, since the universal search environment is quite different there. In contrast to Google and Bing, universal results in Baidu are likely to be dominated by links to Baidu’s own properties. However, News, Image, and Open Widgets may still link to external sites. For Baidu, we include results such as:

In addition to the Universal Result types listed above, we even keep track of non-ranking result types such as Knowledge Panels, Cards, or Carousels. These result types still do not take up a ranking position on the SERP, we still show that they’re present on the page in the SERP Features column. 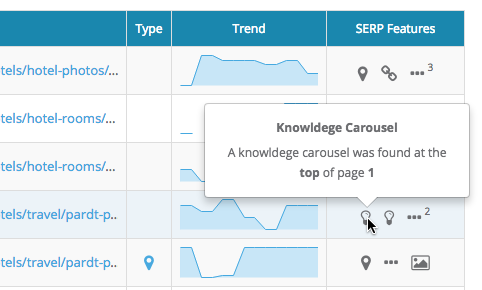 This column shows all universal result types that were found on page 1 for any site (not just yours). This helps you understand opportunities for a keyword.

For example, if your site is ranking #2 for “widget pictures”, but there’s a block of image results at position #1 that doesn’t include your site, it’s likely you won’t receive many clicks for this keyword. Similarly, if there’s a Knowledge Panel on a query, it may be possible that fewer searchers will click-through to your site.

Another great new addition is we’ve moved the ranking trend to a column for each keyword. We will show each date’s ranking position for this keyword in the set date range. This is great for spotting keywords that fluctuate greatly. Now when exporting to Excel, we’ll even include all dates’ ranking (not just begin date and end date).

How this update affects your rankings

Users should be informed that after this update, you will likely see some small changes in your rankings. There’s two main ways this can happen:

Let’s look at a few examples of how this might work.

In the second example, your site only has a news result. Previously, Dragon Metrics would show your site has having no ranking for this keyword, but now it’s again “3”.

In the third example, your site does not have any URLs ranking in universal results. Here, your site is only ranking organically, and not in the news results. In this case, your rankings will go down by 1, from 8 to 9, since we’re now including the news results in our calculation.

While this update will come as a long-awaited relief to most users, we understand that everyone is different. Some may want to keep things the way they are. So if you’d like to continue excluding universal results, you can set it by opening up the filter and changing “Include Universal Results” to “No”. This will set it to show rankings calculated as if we were skipping over universal results, as we had in the past.

You can even compare universal and non-universal search ranking. In the view options next to the ranking table, you can always show and hide columns for “Rank” and “Rank (No Universal)” to see the difference between these two. These columns are both available whether or not “Include Universal Results” is set.

We know how important your rankings and reporting is to you. So whenever we have a rare update that affects the rankings shown in Dragon Metrics, we do not do so lightly. We’ve been researching, evaluating, and testing for the past 5 months. This update is the result of what we believe is going to bring you the most accurate view of your rankings on the SERP.

However, we know some users may still have some questions or want to talk details. Let’s talk – we’d love to help any way we can! Use the live chat in the bottom right of your screen to start a conversation right away. We’d love to hear from you.