The Accelerated Mobile Pages Project (AMP) is one of the biggest topic for SEO in 2016. This Google-backed open source initiative aims to provide lightning fast browsing experience on mobile devices by stripping out most of the performance hungry components of normal webpages. About a week ago Baidu announced their own version of AMP – the Mobile Instant Pages (MIP). The technical aspects of MIP is almost the same as AMP, which isn’t a surprise as it’s been a usual practice for Baidu to follow the footsteps of Google. However here are some interesting implications where China SEOs should be aware of up till now.

If you haven’t heard of AMP yet, watch the video below to learn more:

Why MIP when there’s AMP?

While it remains unknown at this point whether internet users in China will favor MIP or if website owners / businesses are willing to make the switch. The most obvious reason of Baidu creating MIP is going to be the censorship of Google in China. This limitation undoubtedly provide a huge opportunity and room to experiment for Baidu. MIP can be the solution of the following technical challenges brought by the inaccessibility of Google in China:

Because AMP is hosted on Google’s servers, it’s likely that most of them won’t be accessible in China. With MIPs cached and their embedded objects hosted on Baidu’s servers instead of Google’s, performance and stability of MIPs are guaranteed in China. Baidu can also further differentiate MIP in the future to provide tailored user experience for internet users in China.

Both AMP and MIP rely solely on search engines (Google for AMP, Baidu for MIP) to drive entrances. Because Google is not the most popular search engine and aren’t accessible in China, most China internet users won’t be able to enjoy the benefits of AMP. This is when MIP can become the necessary replacement of AMP.

Although AMP support a ride range of Ad networks across the globe, the most popular Ad network in China is Baidu is not one of them. For China websites that rely on ad revenue, creating AMPs make sense only if they serves visitors outside of China. Because MIP is created by Baidu, it can provide much better advertising support for China websites thus making MIP more appealing to them.

Early impact and our future expectations on MIP

On MIP’s website, they’ve claimed that all of the Baidu news sources websites’ve already added support to MIP, however based on our data, MIP news results are only being triggered by “Rio 2016 Olympics” related search terms so far, and unlike Google, where a lightning bolt icon will be shown with AMP result, there’s no visual indication on Baidu SERPs for MIPs.

Organic results are not being affected yet. On MIP’s website they claimed that will cover organic and Aladdin (Search results tailored for Baidu’s strategic partners) results in the future, and will give ranking boost to websites that are using MIP as well.

Considering the MIP project is a near-100% replication of AMP, we expect Baidu will adopt MIP into their search results in a similar way to AMP. Earlier this month, Google announced their plan on showing AMPs in organic search results, we expect this to come to Baidu somewhere down the line as well. However since the MIP project is still in a very early stage, it’s hard to tell how pro-actively they will try to keep up with AMP.

Most China SEOs don’t need to worry about implementing MIP on your sites yet, however with the rise of mobile in Baidu, being aware of MIP is necessary.

If you’ve already created some AMP pages for your site, you should be able to create your MIP pages very easily. But since there isn’t a publicly available tools for MIP creation like the AMP plugin for WordPress, creating MIP pages might require more manual efforts at first. Work with your development team or refer to MIP’s official documentation (In Chinese) to learn more.

Note: If you are an experienced Baidu SEO you probably knew that Baidu has never offered any support for Schema markups — at least not publicly. But on this page of MIP documentation, they’ve stated schema.org as one method that site owners can use to help Baidu discover MIP pages. Interesting isn’t it? 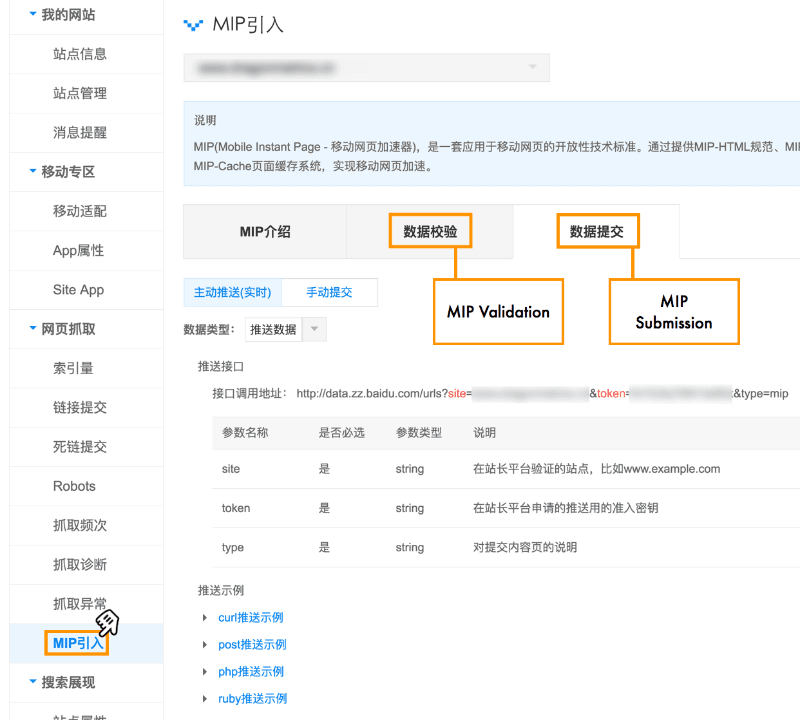 Use Dragon Metrics to keep track of your universal search results

With Dragon Metrics’ extensive universal ranking reports, you will be able to obtain all the necessary data to analyze the potential impact of MIP to your SEO projects. If you’d like to learn more about Dragon Metrics, feel free to signup for a 30 days free trial or get in touch for a demo!